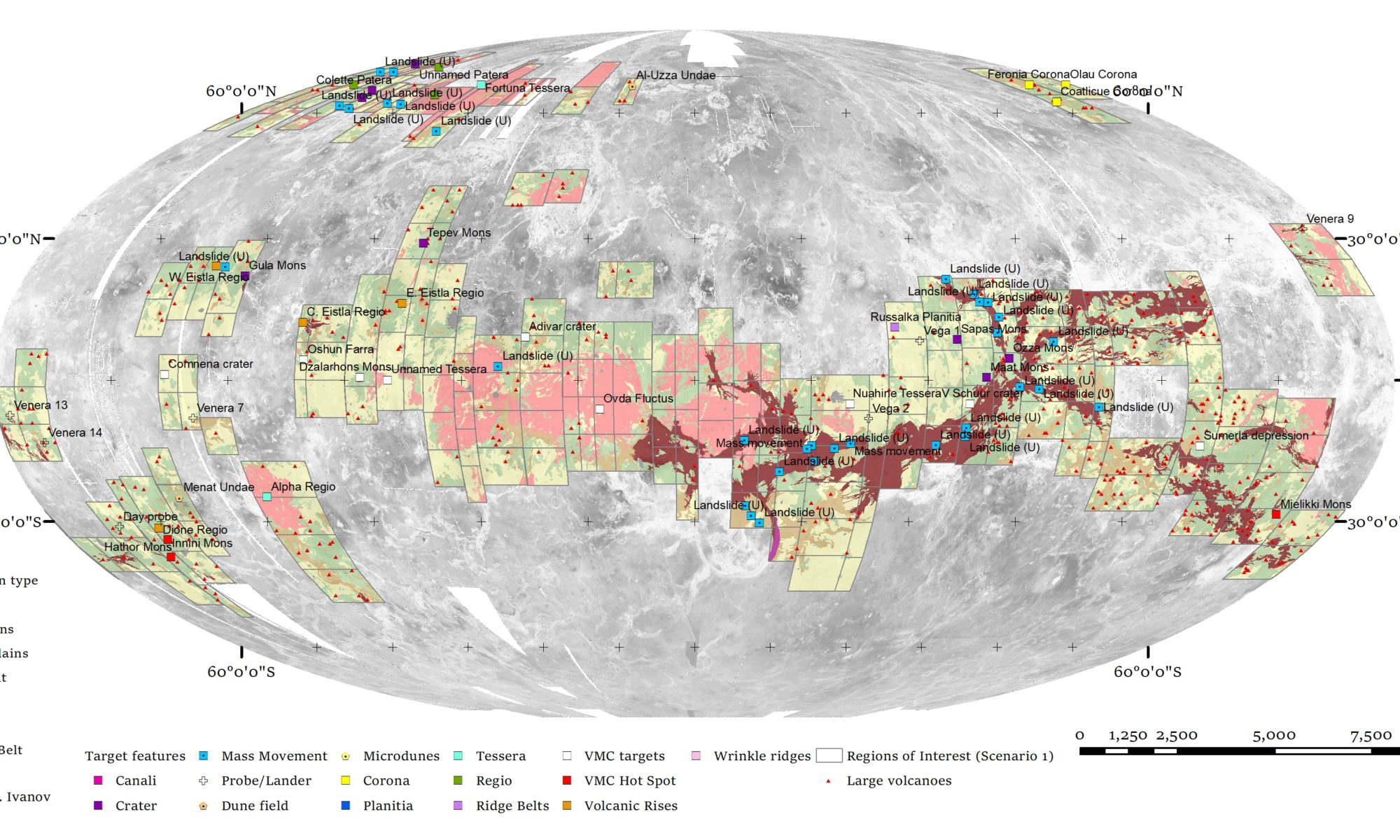 Venus’ global hypsometry (variations in surface elevation relative to a mean) is unimodal, unlike the Earth’s. The study of the cumulative hypsometric curve for both planets reveals that there exists a domain of elevation for which the relationship between the elevation and the square root of cumulative area percentage is linear. This domain covers about 80% of the mapped venusian surface and nearly all the terrestrial oceanic surface (55% of the earth’s surface) and corresponds to an elevation range of about 2000 m for both planets.  It places an upper bound at 90 +/- 10 km for the modal thermal lithospheric thickness of Venus, similar to the Earth’s oceanic lithosphere.  The low-excentricity, near-polar and relatively low altitude (220-400 km) orbit of EnVision offers the opportunity to obtain a high-resolved gravity field at each longitude and latitude of the Venusian globe. The analysis of the gravity field together with the topography gives insights on the lithospheric and crustal structure, allowing to better understand Venus’ geological evolution.

About 70 % of Venus topography lies near the global mean average, consisting variously of smooth, gently undulating or ridged terrain. There is a huge variety of features found on these plains – from volcanic features (see-sides domes etc), tectonic features (e.g. wrinkle ridges etc), evidence of flows (canali), aeolian features (dune fields, parabolae). Are canali or other specific magmatic features confined to a past regime or still active today? Is there a correlation between mesospheric SO2 concentration and volcanic activity? Are crater floors effusively infilled and buried from below? Were the plains formed from a few massive outpourings in a short period of time or from many thousands of small flows over their entire history? Or were they formed, or modified, in an entirely different way?

The surface of Venus is not organised into large plates like Earth’s oceans but it is partitioned into areas of low strain bounded by narrow margins of high strain, analogous to continental basins and microplates. Are these regions actively created and destroyed, like Earth’s oceans, or simply mobilised locally? What is the significance of the global network of elevated rift systems, similar in extent to mid-ocean ridges but very different in appearance? Unique to Venus are coronae, quasi-circular tectonic features, typically 100–500 km across, with a range of associated volcanic features. Are coronae the surface expression of plumes or magmatic intrusions? What role do they play in global tectonic and volcanic change?

Volcanic and Tectonic Features (after Ghail et al. 2018). Rifts follow topographic rises along great circle arcs, similar to Earth’s mid-ocean ridges; wrinkle ridges are predominantly in the lowlands. Tesserae are highly deformed terrain across a range of elevations, and are possibly continental crust.﻿

Impact craters give absolute age of some surfaces, but too few can be seen to allow dating constraints on different geological units. On Venus, the spatial distribution of impact craters cannot be distinguished from a completely spatially random population. This indicates a relatively young surface (less than 600-800Ma). There are open questions about buried features and the nature of volcanic resurfacing. It could have occurred steadily or experienced catastrophic episodes. A debate still exists between “directional” and “non-directional” models. Mapping impact craters and their geological alteration processes will allow to construct a global chronology of the surface that is currently missing.

Representing about 10 % of the Venus surface, tesserae may represent the oldest terrain on Venus. The processes which have shaped them are unknown. They have never been visited by any lander, so their composition is unknown. They might be either felsic (formed in a water-rich environment) or mafic rock types. Detailed morphology and their tectonic features, coupled with characterisation of surface emissivity and subsurface features, will provide an extensive investigation of these regions.

Given its similar size and bulk composition as Earth, Venus is expected to be volcanically and tectonically active today (unlike Mars, which, being only a tenth of Earth’s mass, has lost more of its internal heat). Steep slopes and landslides are common on Venus’ surface geology, implying active uplift, but existing data provide no constraint on current rates of tectonic activity. Comparaison of gravity mapping and topography have revealed some regions which appear to be at higher elevation than would be the case if the mantle were stagnant, implying that they lie atop magmatic upwelling. There are regions where volcanic activity is particularly likely to occur. Sites of potential volcanism identified in Venus Express data were in these locations. Therefore the observation and characterisation of these regions are of high priority.

l. : Idunn Mons (46 S; 146 W) in Imdr Regio, with its steep-sided dome at the summit, as well as lava flows extending in the surrounding plain, is characterised with high emissivity measurements pointing to recent volcanism; r. : a volcanic shield field inside a corona structure, surrounded by a set of younger lava plains.

EnVision is a proposed orbiter mission aiming at determining the nature and current state of Venus’ geological evolution and its relationship with the atmosphere, to understand how and why Venus and Earth evolved so differently. It is one of two M5 mission concepts in Phase A study with a final down-selection expected in June 2021. EnVision’s overall science goals are

EnVision will deliver new insights into geological history through complementary imagery, polarimetry, radiometry and spectroscopy of the surface coupled with subsurface sounding and gravity mapping; it will search for thermal, morphological, and gaseous signs of volcanic and other geological activity; and it will trace the fate of key volatile species from their sources and sinks at the surface through the clouds up to the mesosphere.