Scientific Context: Long-term and spatially-resolved observations of the giant planets with Cassini and ALMA

Objective: Develop a 2D seasonal photochemical model of the giant planets to interpret the spatially-resolved observations

Results: The model solves the continuity equation for all altitudes (~H/3 resolution), latitudes (5° resolution) and as a funtion of time (10° heliocentric longitude resolution). The chemical network contains 22 species, 33 reactions and 24 photodissociations. The temporal evolution of the solar declination is computed from the orbital parameters (period, eccentricity, obliquity, etc.). The actiinic flux is computed with a 3Dspherical geometry radiative transfer model. The model can be fed with a seasonal altitude-latitude thermal field either coming from observations or simulated with a GCM ( general circulation model). The vertical and horizontal eddy mixing (Kyy and Kzz) and advective transport are implemented. Finally, the ring shadowing for Saturn is taken into account.

Acetylene and ethane in the stratosphere of Saturn, as a function of latitude. Comparison of model outputs with observations (taken from Hue et al. 2015).

Publications linked to the projet:

The detection of water in the upper atmospheres (i.e. stratospheres) of the giant planets by the Infrared Space Observatory (ISO ; Feuchtgruber et al. 1997) raised the question of its origin. The cold trap at the tropopause of these planets prevents efficient transport of water from the planetary interiors (supposed to be water-rich) to the stratospheres because of condensation. The water observed by ISO is then external and results from the ablation of micrometeoroids from interplanetary dust or icy ring/satellite particles or from large comet impacts. While Jupiter’s stratospheric water is due to the Shoemaker-Levy 9 impacts in 1994 (refer to this post), the situation at Saturn remained unclear.

The Cassini mission detected water plumes at the South Pole of Enceladus, one of Saturn’s small moons, in 2006 (Porco et al. 2006, Waite et al. 2006, Hansen et al. 2006). Water then forms a torus at 4 Saturn radii, the orbital distance of Enceladus, as proved by the first observations of Saturn with the Herschel Space Observatory (Hartogh et al. 2011 ; refer to this post). Models then predicted that a fraction of this water would rain onto Saturn’s atmosphere (e.g. Cassidy and Johnson 2010), but a confirmation from direct observation was missing.

This missing piece came from Herschel mapping observations carried out in 2010-2011 with the PACS (Photodetector Array Camera and Spectrometer) instrument. The analysis of the data demonstrate that the meridional distribution of water in Saturn’s stratosphere is not uniform (as would be expected from interplanetary dust particles or an ancient comet impact): it peaks at the equator and can be modelled with a gaussian decrease towards the poles, with a half-width-at-half-maximum of 25° in latitude. This is consistent with model prediction and shows that a fraction of the water delivered by the Enceladus plumes eventually falls onto Saturn’s stratosphere

During its final orbits, Cassini detected an extraordinary influx of material coming from the ring plane (Waite et al. 2018, Perry et al. 2018). This influx is orders of magnitude stronger than the one originating from the Enceladus plumes. It seems to be quite recent and needs confirmation from new observations.

On September 27th, 2018, at 14h, I was honored to defend my habilitation thesis at the Jussieu university in Paris, before an exceptional panel of planetary science world experts.

This afternoon will remain a cornerstone in my career. 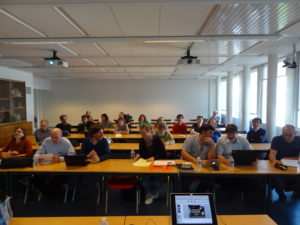