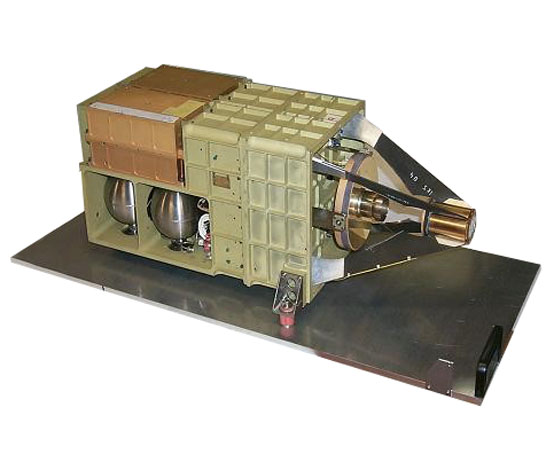 The infrared spectrometer IKS was one of the French contributions to the Soviet planetary space program — IKS stands for “IR Spectrometer” in Russian. The instrument was built by DESPA (now LESIA, Observatoire de Paris) and LPSP (which later became IAS), with contributions from other laboratories. The instrument was comprised of two spectroscopic channels (2.5–5 µm and 6–12 µm) and one imaging channel (which actually did not provide images) the objective of which was to determine the dimensions, temperature and emissivity of the nucleus. The infrared detectors were cooled down by a gas expansion device.

The two Vega spacecraft first flew to Venus in 1985 were they deposited surface landers and balloon explorers. The two spacecraft were then redirected to comet 1P/Halley which was then approaching the Sun on its 76 years orbit. They were the first space probes to reach comet Halley, from a fleet of spacecraft heading to the comet during its 1986 apparition; they were presently followed by Suisei / Planet-A, Sakigake, and finally Giotto. Due to a failure of the cooling device on Vega-2, only the IKS model on board Vega-1 was able to acquire data of comet Halley.

IKS was accommodated on a pointing platform together with the French instrument TKS (a UV-vis-NIR spectrometer built by the Observatory of Besançon) and the Russian TVS camera (which benefited from contributions from France and Hungary).

In the 2.5-5 µm range, the IKS spectra have revealed the presence in the coma of H2O, CO2, and CO molecules, plus H2CO and OCS. An intense 3.2 µm emission band was ascribed to the C-H vibration in complex hydrocarbon molecules, which were not formally identified. Such types of hydrocarbons could be PAH (polycyclic aromatic hydrocarbons, observed in the interstellar medium) or alternatively could be small carbon grains. In the 6-12 µm range, a broad band was ascribed to silicates with a signature similar to olivine. 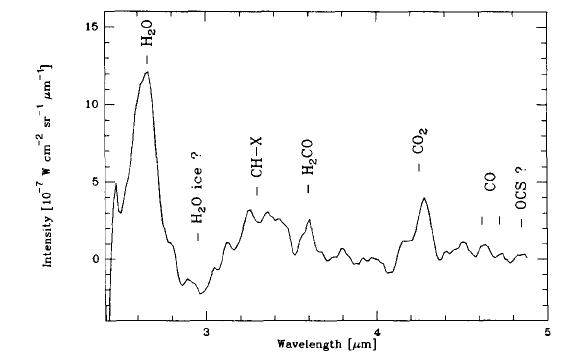 The dataset includes 101 calibrated spectra from the short wavelengths range acquired before closest approach, plus a reconstructed, composite spectrum for each spectral range. The Field of View was 1°, which corresponds to 4000 – 700 km at the distance of the nucleus (25,0000 to 40,000 km). Since the nucleus is only 20 km apart, the FoV is mostly filled by the coma in all cases.
The encounter took place on 6 March 1986 at 7:20 and was extremely rapid (see this video simulation). The minimum approach was 8890 km, at a relative velocity of 79.2 km/s. The Sun distance (0.79 au) and the Earth distance (1.15 au) were practically constant during observations.

The data were originally distributed as a PDS archive. All data are now available in a data service with Virtual Observatory interface. The spectra themselves have been converted to VOtable so that they are more easily handled in this context. The signal level of the short wavelength range has been corrected relative to the PDS archive, to be consistent with the final publication.

Acquisition times and phase angles were not available in the archive, but the target distance was provided for each spectrum. Acquisition times could not be recovered accurately, but phase angles have been interpolated from values reported for the Vega-1 camera images. The phase angle varies widely during operations, because the mobile platform pointed the target during the close encounter. However, IKS acquired measurements only from far distances and the phase angle remains in the range from 99° to 102°.

The IKS dataset is now available as a Virtual Observatory data service responsive to the EPN-TAP protocol. It can be queried from the VESPA / Europlanet search interface or any TAP client.

• Vega probes description at IKI
• Vega-1 description at NSSDC
• Vega at comet Halley, CNES (in French)
• Vega and other cometary missions, with images

The data provided by IKI and DESPA were archived as part of the International Halley Watch in the 90’s, and were distributed on CDrom by NASA/PDS (vol. HAL_0025 & HAL_0026)
More recently the dataset was restored and distributed by the PDS’ Small Bodies Node as a PDS3 archive.
The spectral dataset has been further restored at LESIA (formerly DESPA) and is now available as a service in VESPA, accessible through the EPN-TAP protocol.
VO data service cured by S. Erard & P. Le Sidaner, LESIA / Paris Astronomical Data Centre (PADC).