Short presentation of the thematics in three parts: asteroseismology, the Etoile team in Meudon, my contribution.

Asteroseismology aims at probing the stellar interiors. Waves that propagate through the stars, detected at the surface, tells us what they have seen in the stellar interior, which usually remains hidden with other means of investigation. Low-mass stars show a rich oscillation spectrum. Oscillations are excited just below the photosphere by the breaking of the convection (Belkacem et al. 2011). Evolved low-mass stars have an even richer spectrum, with mixed modes. Such mixed modes result from the coupling of pressure waves that probe the envelope and gravity waves that probe the radiative core. They provide us with a direct access to the core of evolved stars.

The Etoile team is composed of experts in stellar physics and asteroseismology, with multiple skills. The size and diversity of the group allows us to efficiently participate to key large projets, from the technological development to the scientific analysis. The space mission CoRoT of the French space agency CNES was partly developed at LESIA; many of us are involved in the development of the Plato mission of ESA.

My work on red giants benefit from the ongoing discussions within our team. One of our bright successes is due to Marie-Jo Goupil, who made the link between past theoretical work on mixed modes that allowed us to take a qualitative and quantitative advantage in the interpretation of the mixed-mode oscillation pattern.

Many collaborations enrich the work of the group, as shown by the publications cited on this page.

I came to stellar physics after a double experience of research: the seismic study of the giant planets and the seismic instrumentation for either ground-based or space-borne projects. I then developed an expertise in studying solar-like oscillation spectra observed by the CoRoT and Kepler missions. My experience in Fourier transform seismometry allowed me to set up a simple and effective method to detect solar-like oscillations (amazingly, the referee had doubted the usefulness of the article and considered it was useless).

My research is mainly specialized in the seismic study of red giants. My work is based on state-of-the-art methods:

We can conclude that the years 2011 and 2012 were fertile, be sure I was not inactive the other years (it is no less certain that the research process is anything but linear!). The work presented above allowed me to derive many results that irrigate both the stellar physics and the physics of the Galaxy:

The seismic yield for red giants is far from over, with unresolved questions such as the so-called depressed modes, the possibility of probing the stellar cores with new seismic indices, and soon the detailed analysis of the red giant oscillation spectra.

The exquisite precision of the seismic information is derived from such oscillation pattern: 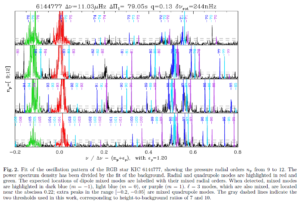